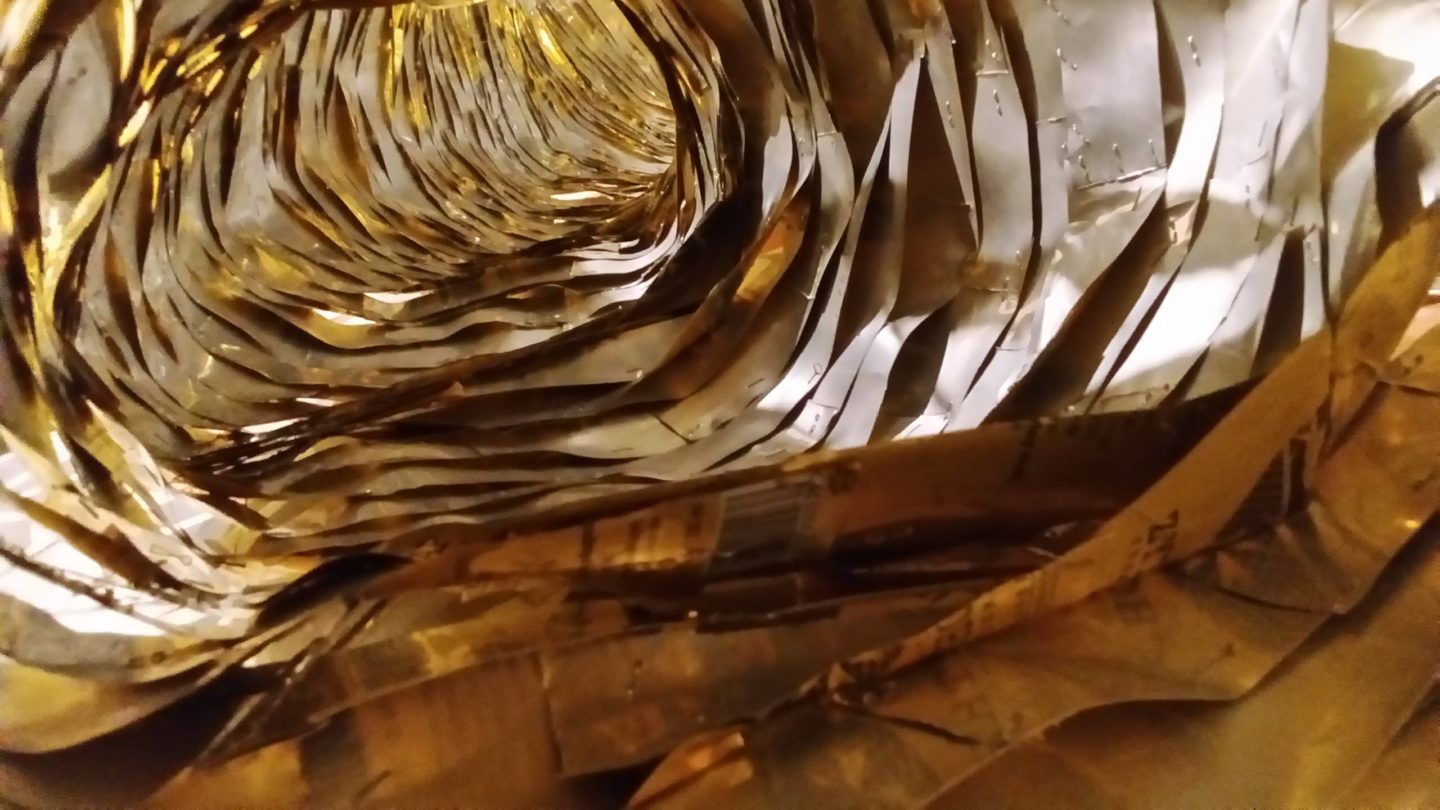 Trash Temple is a site-specific large-scale installation that is built collectively with golden, empty beer cans found and collected in the culturally diverse neighbourhood of Exarcheia in the centre of Athens, Greece. Initiated by the Vandaloop collective, it includes collaborations with refugees and local artspaces, international artists and researchers. Trash Temple was funded by a Burning Man Global Art Grant.

Trash Temple was co-created on the three upper floors of the artspace Chaosmos_/79Au, Exarcheia, Athens. Used golden beer cans of a Greek brand were collected from the streets in order to provide the base material of large-scale installations: golden hybrids from inorganic to botanical, reptilian and bird-like creatures occupy the space, build gates and tunnels, climb up walls until the rooftop …

‘Death room’ : text, audio and plastic filled with water / calligraphy on the walls by Sugano Matsusaki and Katerina Rotoli

On a highly philosophical level, the project is inspired by the attempt of the modern writer James Joyce to raise the mundane and every-day-experience on the level of sophisticated art and beauty. In a similar sense, it is inspired by ancient and medieval alchemy which, famously, had the ambition to create gold out of minor elements. As the philosopher and ethnobotanist Terence McKenna suggests, this ‘quest for gold’ is, however, not to be understood literally but metaphorically, as a quest to purify spiritually. Moreover, the concrete forms of the installations are inspired by the temple architecture of the Mayas, who didn’t use gold as a means for the economy but solely as a gift to their gods. The golden temple made of trash is, therefore, not a praise of the economy but, to the contrary, a praise of spiritual growth.

After the opening of Trash Temple on 26 October 2019, a series of events and gatherings on magic, mysticism and alchemy took place exploring the different rooms and aspects of the installation.

Exploring further the potential of the installation, a screening of the experimental film Ashes and Snow (2005) by Gregory Colbert took place inside the ‘cave’. Combining various traditions from all around the world in peaceful harmony through means of abstract art, the film fits perfectly to our installation.

Since the closing and deconstruction of Trash Temple at Ultime Con-Fusion, its parts are being scattered out into the city scapes of Athens, thus, returning to the streets from where its base material came from: now in the form of sophisticated art …